Since it's release in 2012, Koboloris's self titled debut EP has consistently been our most downloaded digital albums. Despite not having completed a new album since, support for the 2-man black metal band has not trickled to a halt, defying the laws of today's oversaturated world of digital music marketing, where an in-your-face promo plan is often required just to get any listens at all. So it strikes me, something musically must have really gone right, surely this band still has places to go, grand and grim new castles to build on the foundations of  a debut that refuses to die.

So, in order to deliver a tasty new morsel of audio delight to Koboloris fans, we are putting out a remastered edition of the debut EP! 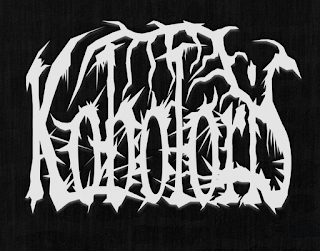 When we recorded and produced the original back in 2012 (yes, that long ago!) production values were tight, equipment basic and experience somewhat lacking - we still made a worthy attempt, but some musical elements may have been lost in the muddy mixing and the hammer-smashed approach to mastering that went ahead. Now it is our chance to bring you the record as it should have been produced.

More details will be announced soon, with a digital release expected around the end of Summer 2016.
Posted by Three Rooks at 9:04 AM